On August 14, the American Chemical Society, Royal Society of Chemistry and the Deutsche Gesellschaft für Chemie launched a beta version of their preprint server ChemRxiv.

On August 14, the American Chemical Society, Royal Society of Chemistry and the Deutsche Gesellschaft für Chemie launched a beta version of their preprint server ChemRxiv. The project, already announced in 2016, was put out shortly after the announcement of a section for chemistry on Elsevier’s SSRN preprint server ChemRN a week earlier.

With ChemRxiv chemists may dissemeninate their findings much faster, which becomes a necessity in times where publishing might take up to 2 years because of overworked peer reviewers and the so-called publication cascade. This means a PhD can show his promise before he is searching for a postdoc position. It also helps in furthering science, as the results may be discussed early on and others can build upon the work. Top journals such as Science even prefer the articles with preprint as they might have already gained some traction before publishing. And, last but not least, the work is already protected as a finding, so no other research group might steal the spotlight by scooping it.

The publication process itself is fairly simple. The article has to be submitted before it is accepted at a journal. Within 1 or 2 days after posting, the preprint will get its own doi after it has gone through a quick test for plagiarism, bogus and offensive content, probably carried out by PhD-students. It is explicitly not a peer review, just a test. Afterwards the preprint cannot be removed, but it may be updated with later versions.

Chemists are known to be a skeptic lot, this is probably why it has taken so long before a preprint server for chemistry was established. Currently the main preprint servers, Arxiv and BioRxiv, only accept articles in specific disicplines: physics, mathematics, computer sciences and life sciences. However, the three chemical societies expect the demand for their preprint server to be high. After the first announcement last year, a fake version of ChemRxiv immediately popped up and chemists were eager to add to it: within a week several articles had been uploaded. For the real beta version we see a similar story: within a month after launch, 45 articles have been posted, attracting over 3,000 downloaders and 22,000 viewers (as seen on September 14).

The oldest preprint server, Arxiv.org, started out exactly 26 years earlier on August 14, 1991. It is a well established source for physics information, even though not every physics discipline attributes equally. Authors from theoretical fields use it more often than those from experimental fields. Its postings seem to be quite successful at getting published as well: a 2014 paper states roughly 64 per cent of the content was published in a Web of Science indexed journal.(Larivière et al., 2014) Other articles are probably still in the submission process. 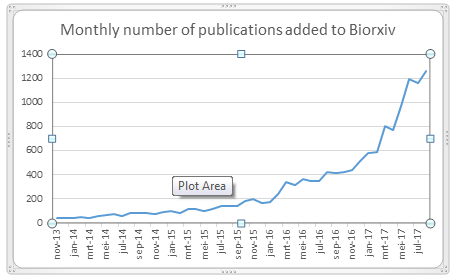 Biorxiv, the biology and life sciences preprint server, took some time to gain popularity. In biology, just as in chemistry, there was a fear of letting ou t articles before peer review. However, a growing number of biologists now find their current work posted on Biorxiv to be a great topic starter at conferences and see it as addition to their Curriculum Vitae as nowadays the time to publish your first author paper might be longer than the time needed to graduate.(Vale, 2015)(Bhalla, 2016) The number of submissions has grown exponentially since Biorxiv launched.

Even though the societies are very positive about the future of their preprint server, one hurdle still remains: not all journals accept publications that have been dissemeninated as preprint. One of the highest impact examples is Angewandte Chemie. But not even all journals of one of the founders, the American Chemical Society, allow the preprint to be posted before publication. For example, the Journal of the American Chemical Society (JACS), The Journal of Natural Products, The Journal of Organic Chemistry and Macromolecules all state ‘new’ information already published elsewhere is not eligible to be published in the journal. To facilitate the process ACS has published a list with policies online. Policies from other publishers can be found here.

To be fair, a similar problem existed for the physics and biology preprint servers. Nowadays practically all publishers in physics allow preprints. For biology 1 year after the launch of BioRxiv journal policies started to change.(Kaiser, 2014)

The ACS itself expects the problem to die out slowly. Policies of individual journals are made by the editors and changes in the boards will probably be reflected in the policy. Though there may be some acceptions as they told last year while visiting the Netherlands for an Open Access meeting: journals with quick turnarounds, so called communications, do not benefit from preprints and would see their market destroyed if they would allow them. Perhaps, these journals might really be replaced by overlays on top of the preprint server as we see evolving in physics at the moment.